Lots of varied and interesting stuff in this interview with Brendan Fraser. I appreciate these pieces about aging artists even more as I start to realize the gap between what my face in the mirror looks like vs how I picture myself (which is, to be honest, as a much younger person than I am).

He excuses himself as I ponder what this means. A few minutes go by. When he returns, it’s with a leather quiver full of arrows strapped to his back. He steps out onto his porch. Outside, he lofts a bow, nocks an arrow. Down below on his lawn, maybe 75 yards away, is an archery target. He releases the arrow straight into the target’s center. Bull’s-eye. Then nocks a second arrow, and does it again.

Took a little walk this afternoon. I’d still rather we all skipped straight to Spring, but this isn’t too bad, I guess. 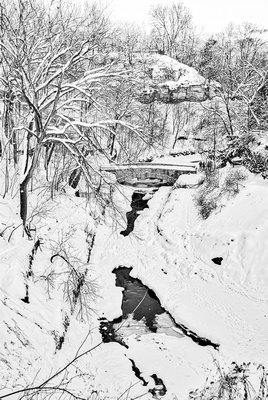 My brain really wanted to read this as a parody. To be fair, it would be a brilliant parody in the right hands. However, this is also a wonderful interview. I like that Elton seems to be in the know about current hip hop artists, and I think it’s a fantastic bit of male role modeling that the interview ends with both of them telling each other that they love them.

JOHN: I always say to people, “If you don’t understand hip-hop, you just have to see it being recorded.” When you’re in the studio—and I’ve seen you record, I’ve been on Kanye West and A Tribe Called Quest records—it’s a completely different ballgame. I get upset when people knock it, because I can absolutely see the musicality in it.

As I was thinking about how to frame this whole discussion, I realized that I need to start with the disclaimer that I’ve only really learned how to date in the past few years. Prior to that, I didn’t really make a point to seek out people to date, and I tended to jump into relationships with the people I did happen to meet that I found intriguing. That’s not necessarily a bad thing, but it certainly didn’t teach me how to date.

I wouldn’t say I planned it out this way, but I entered 2017 simply trying to be open to meeting new people without expectations. I ended up going on dates with 10 new people. Some of them multiple times, and some of them just for a first date. So:

Lesson #1: It’s not that hard to get dates. If an introvert with interests that are uniquely solo (I don’t need anyone else to go take some photos) and an aversion to planning can average almost one new date per month, anyone can. It does take some effort, but not much.

Is it better/worse now than it was when ‘you’, specific reader, were dating? It probably depends on how you feel about choice. Dating apps let you feel like you have a world of options, and I guess I think that’s a good thing, if you’re open to being humbled. It’s a big world out there, and your chances of matching on a dating app/site with that one person you might fixate on are pretty low. But if you open yourself up to meeting people without expectation, there are all sorts of ways to have an enjoyable evening. And no, that doesn’t mean hooking up. I had several first dates that were thoroughly enjoyable conversations with other humans that didn’t go anywhere romantically.

Lesson #2: Humility. Once you accept that you don’t know everything, and aren’t planning for a highly specific outcome, you open yourself up to learning all sorts of new things.

Huh. That got deep.

Along those lines, there is one specific thing that I learned this year… or perhaps that I’m ready to acknowledge and try to work on. I’m even worse than normal at communicating with someone about whom I’m genuinely excited. I’m not sure if this is counter-intuitive or not. I don’t know if it’s because I tend towards depression, and the feeling of actual excitement and happiness throws me off. (That’s probably overstating it a little, but you get the idea.) I do know that it’s not something new, and I can imagine a few specific ex-es who would nod at reading this. But having the experience alongside other less serious dates made it stand out in a way that will make me focus on it, and hopefully improve, the next time it comes along. Which will probably be a good thing.

Lesson #3: Be honest with yourself.

I could go on, and am certainly willing to answer specific questions, but I partially wanted to reflect on this because it was new to me, and I wasn’t sure how serious I wanted to be about dating this year… and I think it would be a good thing if I continued this year as I’ve been going. Best of luck to anyone and everyone else out there who are trying to navigate these waters.

Got massively stuck in the snow this morning trying to leave my apartment on the way to the gym. This is the sort of thing that, in the past, I’ve allowed myself to stress out about and more or less let it wreck my day. Today, instead of that, I’m going to make a short list of related things for which I am grateful.

Things do go wrong, and I’m fully capable of handling them. Even the ones that are bigger than this. That’s a good lesson to remember.

However, I can think of a few examples – ok make that one example – that would be intriguing.

(Although I’m sure Fletch (eponymous) would have evolved with the times enough to be great on Twitter, and maybe we’d have finally gotten the details on that off-track betting in the Himalayas… but I digress.)

I suspect much of my difficulty in picturing social media use in works of fiction is simply due to the newness of the medium. The oldest of the services has only been around for a decade or so, and I think it’ll simply take some time for social media to pop up in enough genres and types of work in a way that will make it feel common. I would have expected to see David Foster Wallace incorporate bits of it sooner than later, for example. More importantly, though, I think it’s all just a little too unlike anything that’s come before to have been incorporated. I can think of plenty of examples of characters who might have blogged, but blogging is just writing, and authors (screenwriters, etc) have been using writing as plot augmentation since forever.

We’ve also seen examples of newer communications styles such as emails show up in books and movies, and Sherlock (the BBC series) did a wonderful job of implementing texting into the visual medium of television. Of course, neither of those are social media, either, and are probably closer to pure writing.

However, and I’ll admit that I’m biased, I think the greater issues at play are that social media is fundamentally boring, doesn’t naturally (nor easily) show you content that you really want to see (NOR easily promote content you create), and is at best, an inefficient time-waster.

(cf this article that suggests that Zuck himself doesn’t actually use Facebook… nor would I, if I had the resources to have someone else do it, and wanted to promote myself. I have neither of those things, so.)

Personally, I gave up Twitter a handful of months ago, and haven’t missed it at all. It was an active distraction to whatever I was also doing, at best (and humans can’t actually multi-task anyway), and frankly the medium, even at 256 characters, doesn’t give you enough room to be insightful without the dreaded ‘thread’, at which point you might as well be blogging. I intended to drop Facebook at the time as well, but honestly it’s too valuable for me for networking (you know, the thing it was designed for) to completely give up. Instagram’s timeline is now a pile of hot garbage, newly set aflame, and in spite of following some genuinely inspirational artists, it also feels like a general waste of time.

Frankly, social media feels very late 20th/21st century American to me. The myth that you’re to believe is that you can stay in touch with friends, stay up to date on news, influence the world, and make money, all by documenting your incredible life and/or thoughts and/or skills. It’s ‘so easy’. None of it’s particularly true, but it’s a nice little dream I guess.

For what it’s worth, I’ll admit that my own journey with social media got corrupted as people started to ask me if I was making money from my photography. It’s an innocent question, and I know it stems from a regard for my work, but it led me down a path that more or less ended in my feeling like a failure for not monetizing my art. Along the way I started to chase getting those ‘likes’ (etc) on everything I posted, and feeling more or less validated by how high the total rose, than simply creating organically because it was something I enjoyed.

I don’t have answers here. But I think it’s worth having the conversation, at least to ask yourself the question: Why are you doing the things you do?

P.S. I am interested to know if you can think of characters that would have interesting social media accounts. Hit me up if you think you’ve got a good one.

There’s nothing tying the two things (drinking and social media) together, aside maybe from the fact that once you start letting things go, it’s easier to keep letting other things go.

I don’t know yet how I’ll be using this space, but my approach is to create things for me. To be deliberate. Intentional. To not have to worry about a ‘brand’ or a ‘presence’. Right now it’s an audience of one, and that will be the intent no matter how much or how little this grows.